A GATHERING OF ALIENS - The 2013 Roswell UFO Festival

In 1947 something fell out of the sky and crashed near Roswell, New Mexico.  It may have been an alien spacecraft, a weather balloon, or nothing at all but the effect it had on the community was profound.  That alleged ‘UFO crash’ spawned an urban legend ---and an economic boom for Roswell.  And so, sixty-six years after the weather balloon/UFO was hauled off and the alien bodies put into deep-freeze I found myself at the 2013 Roswell UFO Festival.

Every Fourth of July weekend the town of Roswell holds the UFO Festival.  Main Street is shut down, the portable concert stage is set up, the vendors fill the street and we’re treated to costume contests, parades, and all sorts of alien-themed silliness.  People come from all over the world to mix with morbidly obese Americans dressed as Grey Aliens and sweat in the one-hundred degree heat of the New Mexico Desert.  A real heatstroke-hoot!  Better drink some more alien-juice and stay hydrated! 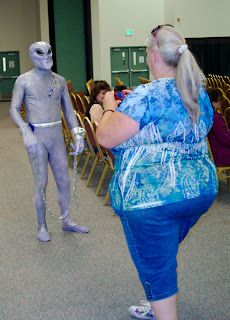 The first event I attended was the Alien Pet Costume Contest held on the Civic Center lawn.  Everybody loves to see little dogs parading around in costumes that, while embarrassing to other dogs, make humans laugh.  And what better opportunity to spray paint Fido green and display the poor critter on stage in front of four hundred similarly dressed humans?  The most appropriate dog to dress up in a silly costume is, of course, The Chihuahua.  And there were plenty of ‘purse dogs’ on display.  While waiting for judging to begin I met Starlina, a tiny Chihuahua from of all places, Wilhoit, Arizona.  Starlina took an Honorable Mention in the contest but I think she got robbed, she should have won.  Ultimately the winner of Best Pet Costume was a cat!  A freakin’ cat!  Give me a break; cats don’t wear costumes nearly as well as dogs.  The judges must have been cat-people.  What are the qualifications for an Alien Pet Contest Judge anyway?  Someone needs to be probed… 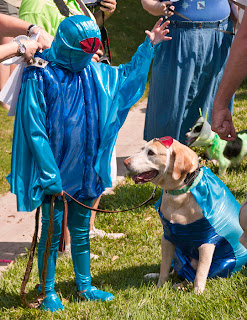 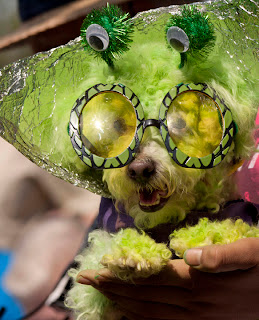 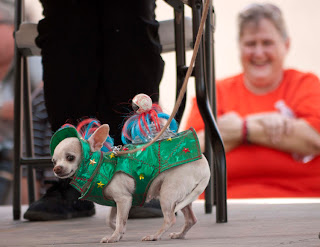 A little later in the day the Pet Costume Contest was followed by the Alien Costume Contest for people.  Thank goodness this one was held indoors in the air-conditioned Civic Center Exhibit Hall thereby eliminating the need for ambulances to carry away overheated people wearing too much plastic and aluminum foil.  Little kids and large adults paraded around wearing strap-on antennas and alien-themed costumes all hoping to win a prize for their creative-fashions.  If an actual Grey Alien had entered he’d of probably lost but a tall dude in a Grey Alien outfit did win this one.  Thankfully the Tron Guy didn’t show up. 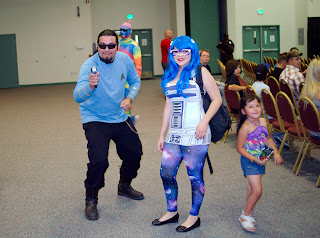 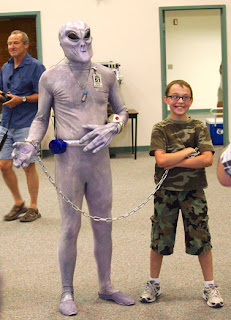 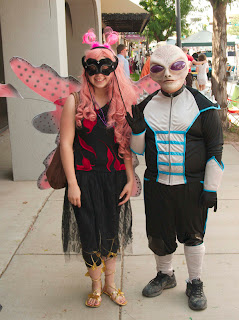 Later it was time to hit Main Street and check out the vendors and the band playing on the concert stage.  I felt sorry for the band.  They were actually good players, but they were wailing away for an audience of four or five ten-year olds, all the adults were hiding indoors, out of the heat.  Later in the evening I heard the same band, playing the same songs, at the restaurant/club across the street from my hotel.  Although they probably lost money playing the UFO Festival they might have made it back at the restaurant gig as bar patrons generally tip better than ten-year olds who ditched their parents to listen to the Rock Band.

The street vendors displayed a remarkable deficit of alien-themed trinkets.  Instead, there were vendors selling the usual food-fare, face-painting, and applying temporary tattoos to little girls who wanted a tramp-stamp just like Mom’s.  There were vendors selling Zuni Fetishes carved in the shape of Space Aliens.  The most oddball vendor I saw was selling Mexican wrestling masks!  I thought about buying one of those Mexican wrestling masks but my sex life isn’t exciting enough to justify the expense.  Around the corner from the street vendors I found the Gallery of the Roswell Fine Arts League where the UFO Art Show was on display.  The air-conditioning was the best thing the gallery had going as the art was truly terrible.  The show consisted of only eleven pieces of ‘UFO art’ that looked like they’d been done in the special-ed art class at the school for the blind.  A painting of ET the Extraterrestrial on Black Velvet has better art-collection potential.

The Space Lady was playing her 1985 Casio keyboard to an audience of one kid on the sidewalk.  With the Casio’s drum machine running at high-speed I half expected her to start singing Wall of Voodoo’s 1982 hit, Mexican Radio, but she stayed away from anything that entertaining. 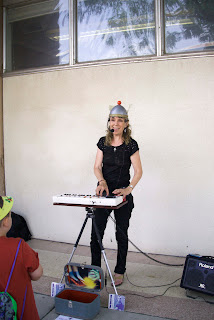 The Electric Light Parade Saturday night was fun but short.  Thankfully it had cooled off to only 98 degrees by 9pm. 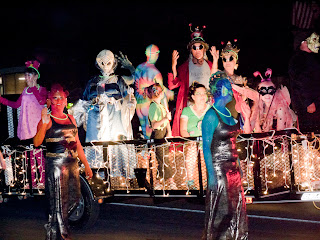 I was starting to think that any intelligent life in the area had died in that crash in 1947 so on Sunday I went looking for Real Science; luckily I found some hidden amongst the costumed silliness.  The International UFO Museum and Research Center hosted a series of lectures by UFO researchers.  The most prominent Expert there was nuclear physicist Stanton Friedman.  He co-authored “Crash at Corona: The Definitive Study of the Roswell Incident” which is the book that brought the Roswell UFO Crash out of obscure Ufology and into mainstream consciousness.  Travis Walton was also there.  Travis is the Arizona logger who was abducted by aliens in 1975 and returned five days later.  The movie, “Fire in the Sky,” was based on Travis’ UFO encounter.  Other speakers included hypnotherapists who work with abductees; crop circle researchers and military experts.  The folks from Open Minds Productions (the organizers of the International UFO Congress) were there as well.  I had a very interesting conversation with Aaron Sagers, host of “Paranormal Paparazzi” on The Travel Channel.  His presentation centered on celebrity UFO sightings and we had a lively discussion about mass consciousness and the paranormal in Pop Culture. 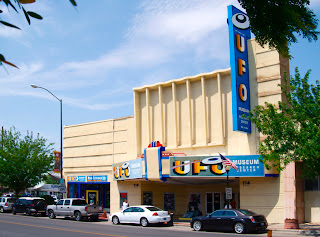 The Roswell UFO Festival is a fun vacation destination for anyone interested in the Alien/UFO phenomena.  It’s an entertaining couple of days with something for every kind of Carbon Based Lifeform.  There’s even some real science there, if you’re willing to look for it.
﻿
Posted by Dale O'Dell at 10:17 AM No comments: